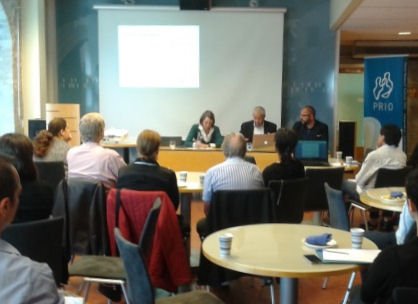 On June 10, 2015, the supervisor of the BPC, Paulo Esteves, participated in the seminar “Brazil: An Emerging Humanitarian Power” organized by the Peace Research Institute Oslo (PRIO) in Oslo, Norway.

The seminar discussed the role of Brazil as an increasingly important actor committed to the field of humanitarian aid and peacekeeping in the international context. During the Lula administration, known for its efforts in reducing poverty and inequality, Brazil also increased its international presence as well as its international humanitarian effort. A prime example is Brazil’s involvement in Haiti, where the Brazilian army, since 2004, has been leading the UN mission, MINUSTAH. This humanitarian commitment also serves as a key example of Brazilian foreign policy and its international ambitions. The Brazilian foreign aid budget has shot up from USD$ 3 million in 2007 to over 95 million in 2010. Important changes have taken place in Brazil in recent years as well, with the transition to the Dilma Rousseff administration since 2011 and the recent economic recession. Accordingly, the seminar aimed to investigate the type of status Brazil is seeking internationally and what role it currently plays with its main partners. In addition to evaluating its international commitments, especially efforts to maintain peace in Haiti, as well its domestic refugee and resettlement policies, the seminar also analyzed the Brazilian civil society more closely, particularly NGOs involved in the field of humanitarian assistance.

More information about this seminar is available at: https://www.prio.org/Events/Event/?x=8340.