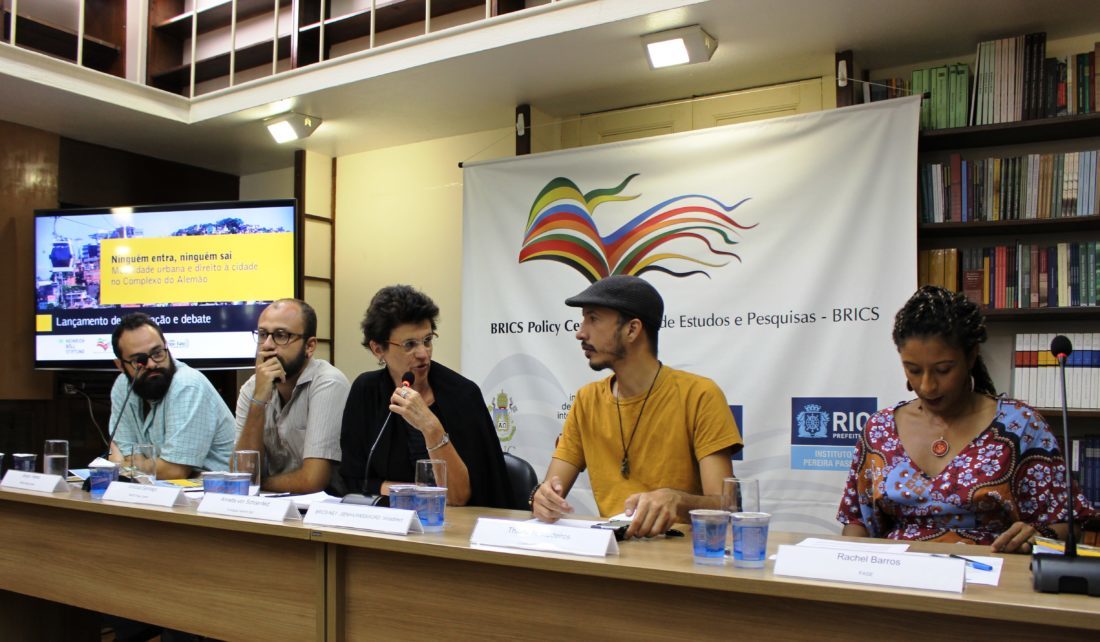 No one enters, no one leaves – urban mobility and right to the city in Complexo do Alemão

This Tuesday (11/14) ocurred the event and launch of the publication “No one enters, no one leaves – Urban Mobility and the Right to the City in the Complexo do Alemão”, which was produced by the BRICS Policy Center, in partnership with the Heinrich Böll Foundation Brazil and the Colectivo Papo Reto. The debate was mediated by Anette von Schönfeld, director of the Heinrich Böll Foundation’s office in Brazil. On the table were Sérgio Veloso and Vinícius Santiago, the authors of the book, Thainã de Medeiros, from the Colectivo Papo Reto, and Raquel Barros, from the NGO Fase.

At the beginning, the researchers presented the most important results of the research, whose objective was to map and systematize the difficulties faced by residents of Complexo do Alemão, in Rio de Janeiro. The study showed that buses (52.2%) are the most used mode of transportation in Rio, followed by motor-taxi (12.4%), van (12%) and car (10%). Most respondents need a bus (46.6%) to get around the city, 35% of people need two buses and 12.3% need three. Within the Complexo do Alemão, most of them walk on foot (47.8%), 31.3% use moto-taxi and 9.3% use vans. With regard to the mobility lift within the Complex, 51.4% rated the cable car as very poor, while 31.1% answered that it was very good. The study also showed that women feel less secure in the Complexo do Alemão than men.

After presenting the results of the research, Thainã de Medeiros and Raquel Barros shared their personal experiences regarding the issues raised by the study. An important factor influencing mobility in the Complexo do Alemão is safety. Residents suffer from constant shootings and police violence. Residents need strategies and tactics to move through situations of shooting or dealing with a police officer who sees everyone as potential criminals. Especially women and children have a more vulnerable position and suffer from insecurity when moving in the Complexo do Alemão.

At the end of the debate, there was a lively discussion between the audience and the members of the bureau. Many interesting aspects of research and debate have been taken up and deepened.

The transmission of the discussion table can be accessed on the BPC Facebook page.

The Publication “No one enters, no one leaves – Urban Mobility and the Right to the City in Complexo do Alemão” can be accessed here.