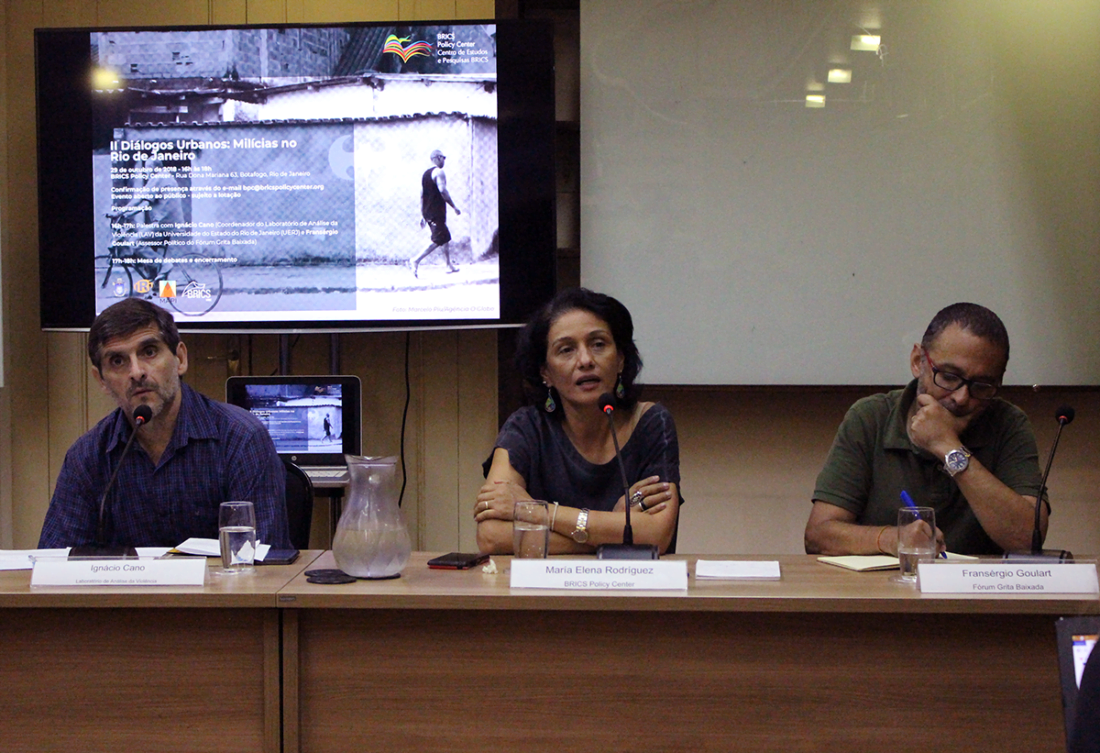 On October 29, 2018, the BRICS Policy Center hosted the Dialogue “Militias in Rio de Janeiro”, organized by the BRICS-Urbe. The program, which has focused its research on the dimensions of socio-spatial inequality since last year, aims to complement other initiatives, research and practices in the city that seek to advance the agenda of the right to the city for a fairer, safer and egalitarian Rio de Janeiro.

The speakers were Ignácio Cano, Coordinator of the Laboratory of Analysis of Violence (LAV) of the State University of Rio de Janeiro (UERJ), and Fransérgio Goulart, Political Advisor of the Grita Baixada Forum.

Ignacio Cano, who participated in the research papers seIs por meIa dúzIa? and No sapatinho, spoke about the difficulty of researching about the militia due to a high degree of intimidation produced by these groups. According to the researcher, unlike drug trafficking criminal organizations, the militia are not interested in visibility, acting with increasing discretion in recent years.

The seminar had its focus on the advance of militias in certain territories of the state of Rio de Janeiro and the power these groups exercise in controlling services, ensuring local “security” and social order. Cano also pointed out that the militia has been dominating territories that were previously influenced by drug trafficking organizations, increasing their area of ​​control. In areas under militia rule, the population is forced to pay the militia fees through coercive monopolies, for services such as transportation, cable TV and even “protection” fees.

According to Fransérgio Goulart, about two million people live in areas influenced by the militia in Rio de Janeiro. According to him, the inefficiency of the State in combating these organizations comes from the inexistence of security policies based on fighting racism. Goulart also highlighted some forms of resistance of the population, such as the production of the documentary Our Dead Have a Voice (2018) and the People’s Court held in September of this year in Duque de Caxias, which simulated the trial of deaths caused by state agents in Baixada Fluminense.