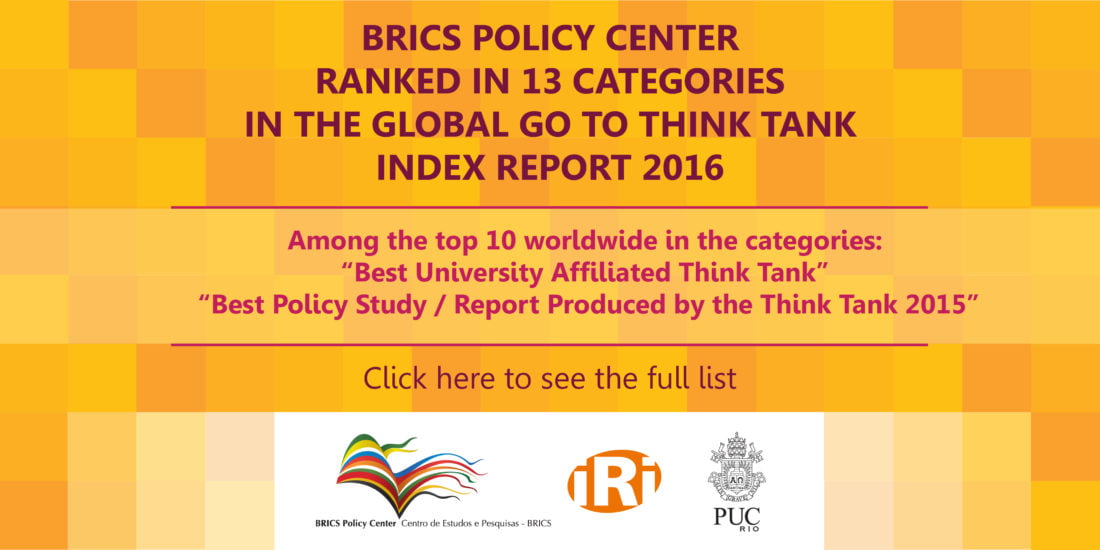 FOR THE THIRD CONSECUTIVE YEAR, THE BRICS POLICY CENTER HAD BEEN RANKED AMONG THE 10 BEST UNIVERSITY AFFILIATED THINK TANKS WORLDWIDE

The 2015 edition of the “Global Go To Think Tank Index Report”, published by  the University of Pennsylvania (USA), ranked the BRICS Policy Center (BPC/PUC-Rio) – for the third consecutive year – among the Top 10 think tanks associated with universities and among the “best transdisciplinary research programs in a think tank”. According to Paulo Esteves, BPC general supervisor, this is an important category given the very nature of the Centre: “Our think tank is a space for both research oriented analysis and policy proposition, and it is also a teaching-learning environment. At BPC, undergraduate and graduate students learn by doing. It is through the conduct of research, production of analysis, the organization of political dialogues that our students develop skills and competencies that will impact their professional lives”. The category of the best university-affiliated think tanks is led by the US and British centers. Among the top ten, the BRICS Policy Center is the only think tank off the US-UK axis, being, thus, the first Brazilian and Latin American center in this category.

In this year’s edition of the “Global Go To Think Tank Index Report”, BPC’s publication “Right to the city for a safe and just world: The case of the BRICS” was rated as the 9th best policy study-report produced by a think tank in 2015. The paper was organized by Sergio Veloso, Professor at IRI/PUC-Rio and researcher at the BRICS Policy Center, and is the outcome of a partnership between BPC-OXFAM established since 2013. According to Sergio Veloso, “The most challenging global problem we face in today’s world is inequality in all its forms, manifesting increasingly in urban environments. Thus, the BRICS Policy Center, in partnership with Oxfam, edited this study to draw attention to the need to ensure that cities become spaces of rights and active citizenship exercise. It seems to be the main way to tackle inequality on a global scale”.

In 2014, BPC had already excelled in this same category – best policy study-report with the Policy Brief “Brazil and South-South Cooperation: How to Respond to Current Challenges”, being then placed in the 39th position. In 2015, BPC has also been ranked in other 12 categories. The report evaluated more than 6.500 think tanks worldwide and, for the third consecutive year, the BRICS Policy Center has been placed among the top 10 “Best University Affiliated Think Tank” and “Best Transdisciplinary Research Program at the Think Tank.” Furthermore, for the first time, BPC was rated as one of the best Think Tanks in Central and South America.

Best New Idea or Paradigm Developed by the Think Tank – 4º