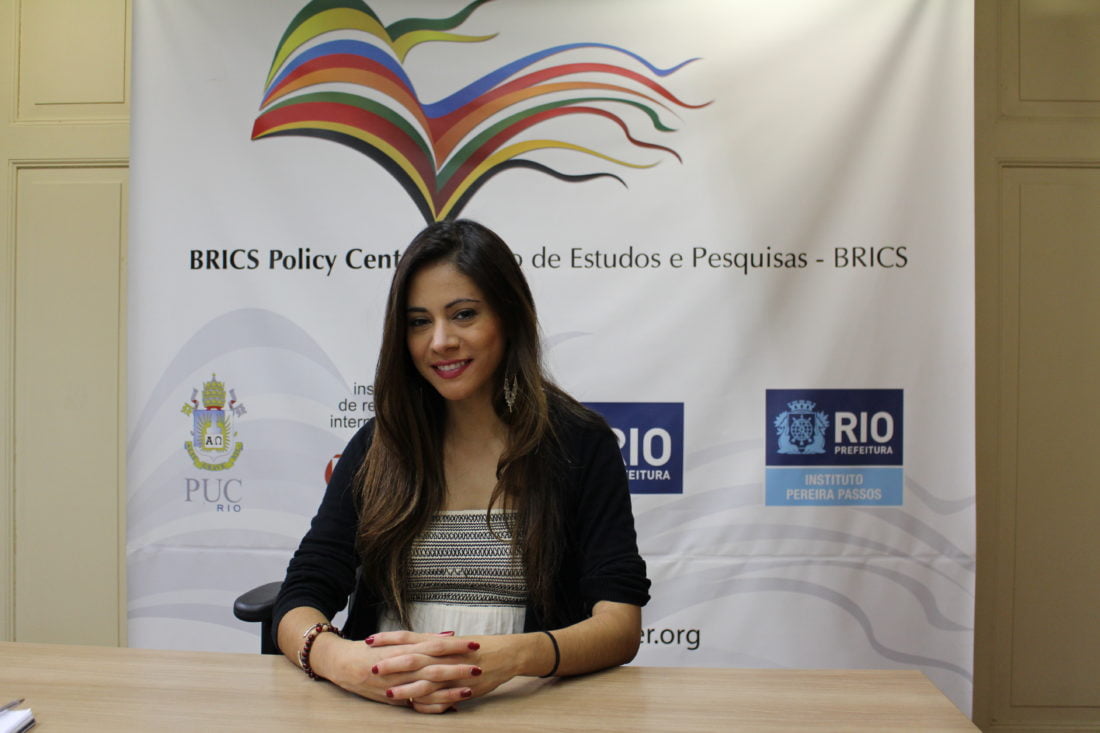 Ms. Gúzman Peña debated the topic of the contribution of civil society to the conquest of seventeen objectives described in the UN’s Sustainable Development Agenda. Her research suggests that an approach which is not restricted to official government structures can contribute to the long term success of the 2030 Agenda in Brazil.

The discussion that followed the presentation introduced various specific considerations about the interaction existing between the non-governmental and governmental sectors in Brazil, indicating areas of interaction with proven success in the Brazilian experience. (The comments of the academic community in relation to the preliminary research of the speaker will serve to inform the continuity of research in question, which will result in a Policy Brief, to be published shortly.)

The Sustainable Development Objectives (SDO) are an object of great interest for the BRICS Policy Center, since they bring together the efforts of the global community in terms of development. Various initiatives of the Center are based on the 2030 Agenda.

Have a look, too, at the interview we carried out with Daniela Gúzman Peña, about her time in the BPC and about her research around the role of Civil Society in Development.

Could you give us a short biography of your academic and professional career?

My name is Daniela Gúzman Peña and I’m from Bogotá, Colombia. I’m doing a masters at the School of International and Public Affairs at Columbia University. I graduated in journalism from the University of Florida and covered topics of anti-corruption, anti-money laundering, cyber security and financial crimes. This created a curiosity about how inequalities permit these crimes to occur, which led me to enter the world of academia. Because I recognise myself as Latin American, I have a big interest in the region and now I’m back in Brazil doing work with a focus on Sustainable Development in Centro Rio+, an organisation created by the UN Development Programme. My interest in Rio, specifically, came from doing a course in the Institute of Research and Urban Development at the Federal University of Rio de Janeiro (UFRJ).

You participated in the Winter School of GSUM. Did you see a relation between topics covered there and your own research?

GSUM has a focus on mediation and in how it can help in conflict resolution. As well as this, I have a big interest in understanding how mediation can help in Sustainable Development. The Winter School gave me the opportunity to understand in greater depth, for example, the relationship between disarmament and mediation, as mediation and the participation of a third party can help to resolve situations that initially seem unsolvable. We also had the opportunity to go beyond the theory and learn about real cases in which mediation helped. The participation of the ex-president of my country, Ernesto Samper, who gave a speech at the opening of the Winter School, and hearing about the peace process in Colombia was very interesting and I was grateful for that opportunity.

Can you explain a little about Rio+  and your work in the center?

The UNDP is an arm of the United Nations with more than one hundred offices worldwide. The Centro Rio+ is one of the them, focused on Sustainable Development and is unique because it’s one of six themed centres created by the UN. The focus of the Center is on research and partnerships with different organisations, at the municipal, state and federal levels to try to promote the agenda of the UN 2030 for sustainable development. It’s interesting to realise that the Centro Rio+ works at the local level on a global issue.

My work in the Center is researching and producing content about these initiatives and their results to show that the objectives of the UN 2030 (combating hunger and poverty, climate change and gender equality) are happening here. It’s a function less academic and more journalistic. One example of these initiatives is the program Young Journalist with young people from the North Zone of Rio and from the surrounding region where they collect news and publish on a blog.

What similarities do you see between the research of Rio+ and BPC?

My work as a journalist opened doors to see the initiatives in Rio working together with these objectives and with the support of BPC this is becoming an academic research, a Policy Brief focused on the objectives of Sustainable Development (ODS) to see how Rio promotes this agenda at the local level. This Policy Brief will be part of the Socio-Environmental Platform.