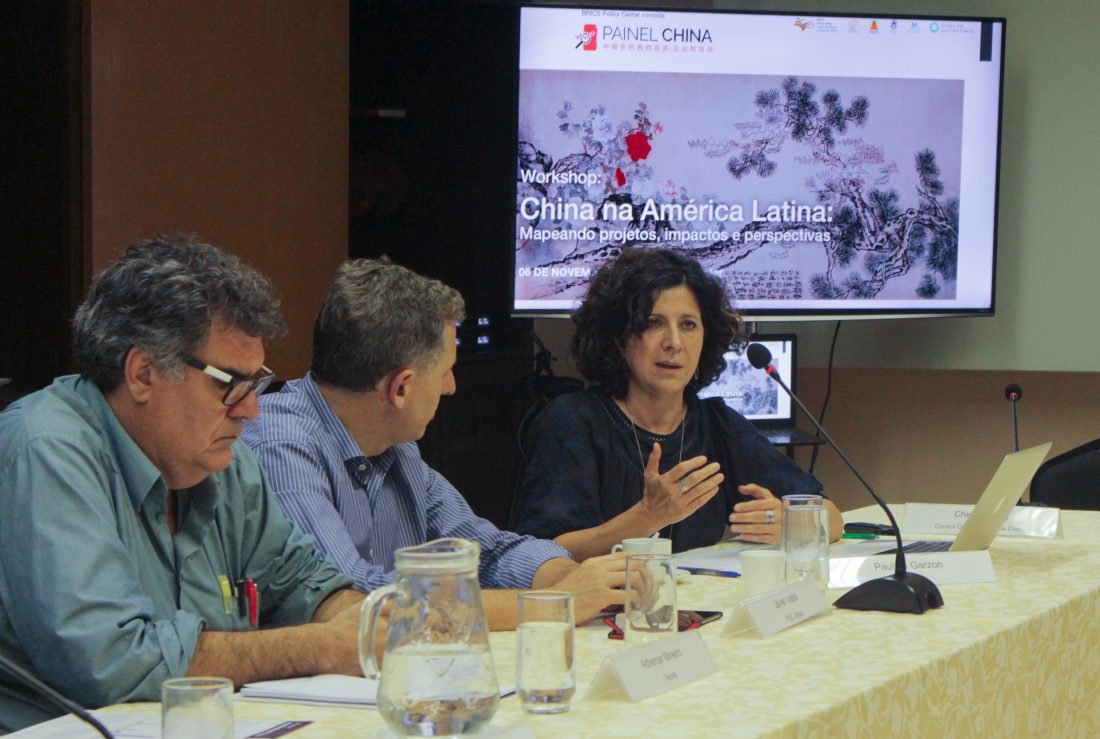 The expansion of Chinese economic ties with Latin America, as a result of the great economic growth experienced in that country, has become an important subject of debate amongst academics, the government, and civil society. Because of this, the BRICS Policy Center organized the workshop “China in Latin America: mapping projects, impacts, and perspectives” this past 6th of November, which brought together important specialists in the field to debate the nuances of these narrowing relationships between Latin American countries and China.

On the occasion, the visitors had the chance to discuss, through an ample debate, the implications of the importance of China on the international order, on relations with Latin America, and, more specifically, on relations with Brazil. At the first table was the Chinese Consul General to Rio de Janeiro, Chen Xiaoling, who highlighted the rapid development of China in the last 70 years. This included a significant improvement in the population’s quality of life, and the importance of the commercial opening, which occurred in 1978, for the economic growth of the country.

Still at the first table, Paulo Esteves argued that we have been seeing fundamental changes in the international system since the beginning of the 2000s as a result of development in China and of the consequent process of the establishment of an international order with Chinese characteristics. According to Luis Fernandes, in the last 30 years we have observed a transitional period in the international system; an erosion of power relative to the dominant powers of the 20th century, meanwhile there has been a rise in more dynamic centers in the former periphery of the system (multi-polarization), with particular reference to China.

Javier Vadell (PUC-Minas) more specifically addressed the growth of commercial relationships between China and Latin America in the twentieth century. He emphasized the regional integration processes like, for example, CELAC (Community of Latin American and Caribbean States) and the cooperation for development in opposition to new forms of dependence. Some of the factors of this Chinese expansion are important for future research agendas like the recuperation of the principles of CSS (South-South Cooperation) as non-intervention and non-conditionality, opening the possibility for a new regime of help and cooperation for development, Vadell pointed out.

Afterwards, Tulio Cariello, from the Brazil China Business Council presented a study from the organization about Chinese investments in Brazil. The study, which encompassed the years 2007 to 2018, contains various aspects of the investments, such as quantity of projects, value invested, sector of occurrence, and others. Afterwards the professor Maria Elena Rodriguez discussed a series of questions pertinent to Chinese-Brazilian relations, their questions and current configurations, including with other countries and governments.

Launching of the China Panel

At the end of the workshop, professors Paulo Esteves and Maria Elena Rodriguez introduced the launch of the China Panel, a platform produced by BRICS Policy Center, which brings together and systematizes Chinese investments in Brazil and the commercial fluxes between China and South American countries, beyond possessing a radar that maps the Chinese presence of the listed countries.