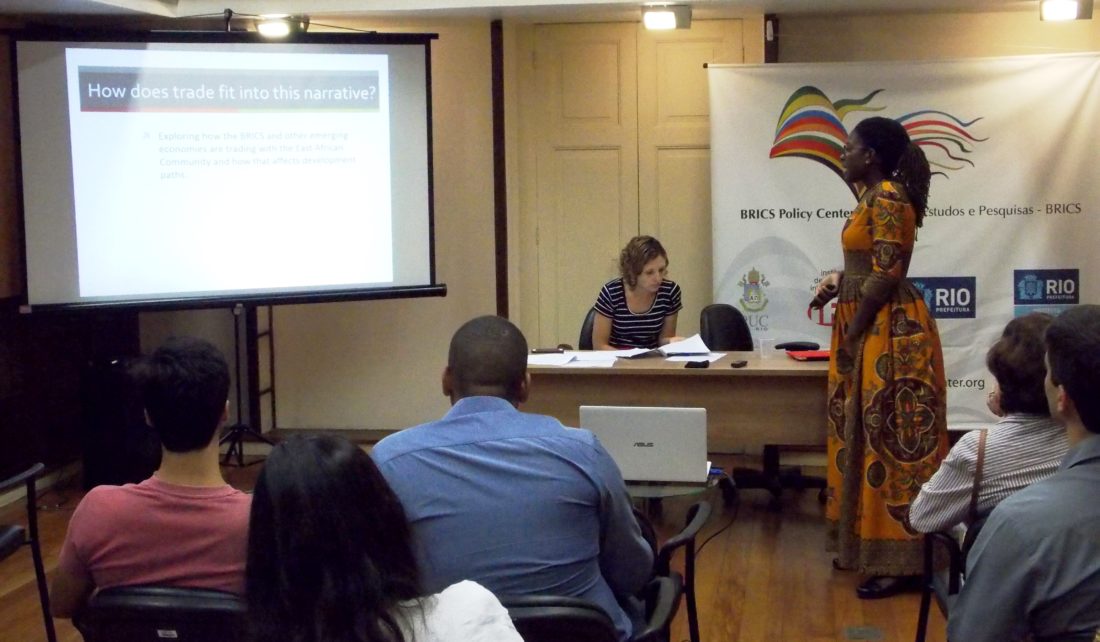 “SHIFTING TRADE PATTERNS IN THE NEW DEVELOPMENT LANDSCAPE: BRICS AND OTHER EMERGING ECONOMIES IN THE EAST AFRICAN COMMUNITY”

On November 23, 2016, the seminar “Shifting Trade Patterns in the New Development Landscape: BRICS and other emerging economies in the East African Community” was held at the BRICS Policy Center, being the result of research by Maria Nagawa, researcher of the Center. The event also included the participation of Ana Garcia, professor at UFRRJ as a debater.

Nagawa opened the seminar elaborating how South-South cooperation is a forum through which countries in the global south can learn development lessons from each other. As an example, she discussed how the city of Rio de Janeiro had remarkably improved access to primary health care over the past ten years and how her home country of Uganda could use Rio’s experience to address the crisis in its own health sector. In trade specifically, she discussed how cooperation among countries in the south could facilitate the negotiation of better terms in trade agreements.

In relation to the BRICS, Maria emphasized that it is important not to look only at economic growth, but at the GDP per capita of each one.Although India has a high rate of economic growth for example, it also has the lowest GDP per capita among the BRICS, or in other words, the growth of the country does not reflect a fair improvement of quality of life for the population. She questioned whether the BRICS as an economic bloc could continue to be regarded as a viable alternative to the existing international order if their domestic political and economic situations were unstable.

In reference to the East African Community, which comprises Kenya, Uganda, Tanzania, Burundi and Rwanda (and most recently South Sudan), Nagawa argued that the most integrated region in Africa needed to diversify its economic partnerships. She pointed out that thinking outside the box is essential.

As an example, Nagawa used the importance given to the commercial relationships with China which, despite being the region’s biggest import partner, was still relatively closed to EAC exports and that emerging economies as a whole had not altered the structure of trade. EAC countries continue to export primary products and import expensive manufactured goods. This indicates that the process of industrialization in these countries is proceeding slowly, pointing to the difficulty they face in diversifying their exports. She added that although FDIs into the region from emerging economies like China were growing, they were still only a fraction of FDIs from more traditional partners such as the E.U. and South Africa. She further mentioned that countries such as Japan and Malaysia presented interesting opportunities for FDI and export markets for products with some value addition.

The main discussant, Ana Garcia, also underscored the unequal trade competition of the BRICS in the region and questioned the best way forward for the EAC. Nagawa responded by calling for more trade protectionism, which may help the EAC countries boost local industry and become more internationally competitive.

Maria Nagawa will remain a researcher at the BPC until February 2017.