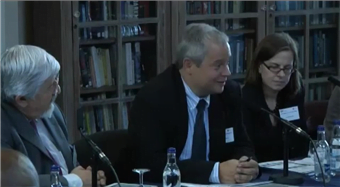 Participation of BRICS Policy Center on the conference “The Rise of the Global South: Towards an Agenda for a New Century” on LSE -– London School of Economics

On January 17, 2014, professor Paulo Esteves, supervisor of the BRICS Policy Center, attended the LSE CAF-First Annual Conference (Development Bank of Latin America – The London School of Economics and Political Science): “The Rise of the Global South: Towards an Agenda for the New Century” held at LSE, in London. The event aimed to understand the rise of the Global South to the ambit of world politics, focusing on the principals international actors of the regions and their perspectives on global issues.

Many experts in the field participated of the event, including Dr. Chris Alden (Director of GSU), Dr. Craig Calhoun (Director of LSE), Dr. Enrique García (President of the CAF), among others. The conference also included the presence and presentation of Dr. Enrique Iglesias, Ibero-American General Secretary.