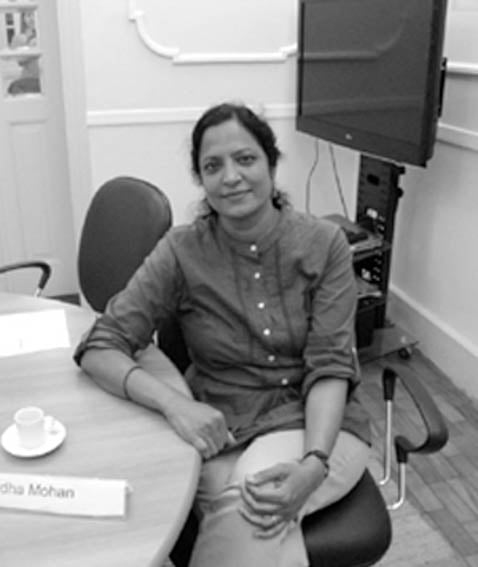 Dr. Sudha Mohan is an Associate Professor in the Department of Civic and Politics, University of Mumbai. She teaches the following courses: Comparative Politics, Development, Urban Policy in the Age of Globalization and New Policies Identity, among other on Graduate level. She already has publications in the areas of Urban Development, New Localism, Urban Governance, Globalization, Local Responses to Global Challenges, Role and Relevance of Civil Society, Human Safety, Urban Space Policy, Water Governance and etc. She participated and presented research papers in various national and international seminars as well as conferences. She also collaborated with interdisciplinary projects and comparative research. Dr. Mohan was the winner of the Mr. Fullbright scholarship, 2004-2005, USA; Nirman Fellow at the Center for the Study of Democracy, Department of Politics and International Relations at the University of Westminster in 2009, Erasmus Mundus Visiting Scholar, constituted by the Commission European in Europe in 2010. She has been visiting the Summer School of the University of Osnabruck, Germany and the University of St. Gallen in Switzerland to teach at a seminar in 2010 on their areas of expertise including: Urban Studies, Development Studies, Political comparative and interdisciplinary studies. His research interests include: Substantive Democracy and Urban Development, Civil Society, Governance and Globalization, Cities, Ethnicity and Citizenship, Global & Local Interference. Her current projects include Security Threat Non-Traditional, and Policies in Urban Space Productions, Right to the City, the Urban Concerns Critical areas in BRICS and Explore Sustainable Urban Alternatives.