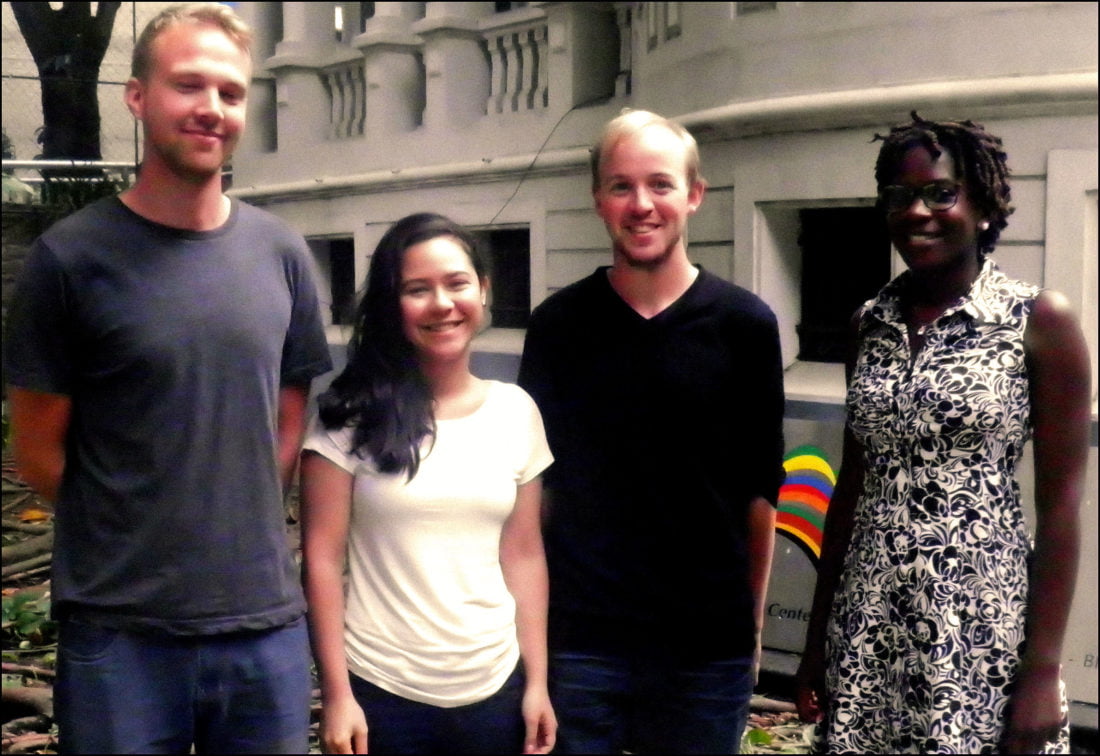 In the second semester of 2016, arrived to the BRICS Policy Center the new exchange students that will make up the squad of Volunteer Interns. Anders Jensen, Frederik Skaaning,Samantha Mesquita and Maria Nagawa will work in research in the area of International Cooperation for Development. Francesco Petrone and Tara MacKinnon, meanwhile, will work with the Socioenvironmental Platform.

Anders Jensen and Frederik Skaaning, Danish, are doing Masters in Development and International Relations, which approaches International Relations in the economic, political and sociological aspects, at Aalborg University. The research of Jensen converges with that of the BPC in the sense that he is interested in knowing how the BRICS can move forward against the interests of the US in the World Bank, and also, how the US and China are able to influence and protect their interests in Venezuela and Latin America. Skaaning, for his part, seeks to investigate the IBSA block, which maintains a forum of negotiations about political, economic and social aspects in the context of South-South cooperation, which also links to the research of the BPC. At the end of his period at BPC, Anders will publish a a Monitor about the New Development Bank. Frederik will produce a comparative Fact Sheet about China-CECAC and FOCAC.

Samantha Mesquita, also doing a Masters in Development and International Relations at Aalborg University, will research how the BRICS can “work as a bridge” in order that the framework of International Fiscal Cooperation becomes more democratic and representative, with Brazil at the front of the defence of less developed countries, since the question has been historically dominated by the OECD and the countries of the global North. The result of her research will be a possible Fact Sheet on the subject.

Maria Nagawa, from Uganda, is doing a Masters in International Political Economy and comes to the BPC in order to analyse the commercial relations between the BRICS and the East African Community, since, according to her, such relations are an important part of any type of cooperation. The idea of the research is to guarantee that there are no other opportunities for cooperation that are not yet being explored by the bloc. She argues that, as the dynamism generated by the free movement of capital, people and goods is essential for development, such an arrangement should be set up between the countries of the global south, to alter the current North-South relationship. Maria wants to do a doctorate in IRI/PUC-Rio and possibly to publish a Policy Brief with the BPC during her time in Rio.

Francesco Petrone, Italian, has a Masters in Political Science from the University of Barcelona and has a PhD by the same university. His interest in the Center came from research about the BRICS and how new powers challenge the current global decisions. During his period in the BPC, Francesco will focus on the influence of the BRICS countries in climate change and the COP21 decisions. Petrone is part of the Socioenvironmental Platform and will publish a Policy Brief about Global Governance and climate change.

Finally, Tara MacKinnon, of the USA, is doing a Masters in International Relations at Syracuse University, New York, with an emphasis on Development and Latin America. She is doing research on South-South cooperation and relations between China and certain African countries, focusing on the Forum on China-Africa Cooperation (FOCAC) and on the Macau Forum. MacKinnon is part of the Socioenvironmental Platform, helping in the research about the New Development Bank of the BRICS. Her time in the BPC will result in the production of a Fact Sheet about the FOCAC, to be published in the future.

For more information about how to become a Volunteer Intern in the BPC, send an e-mail to: bpc@bricspolicycenter.org or click here.