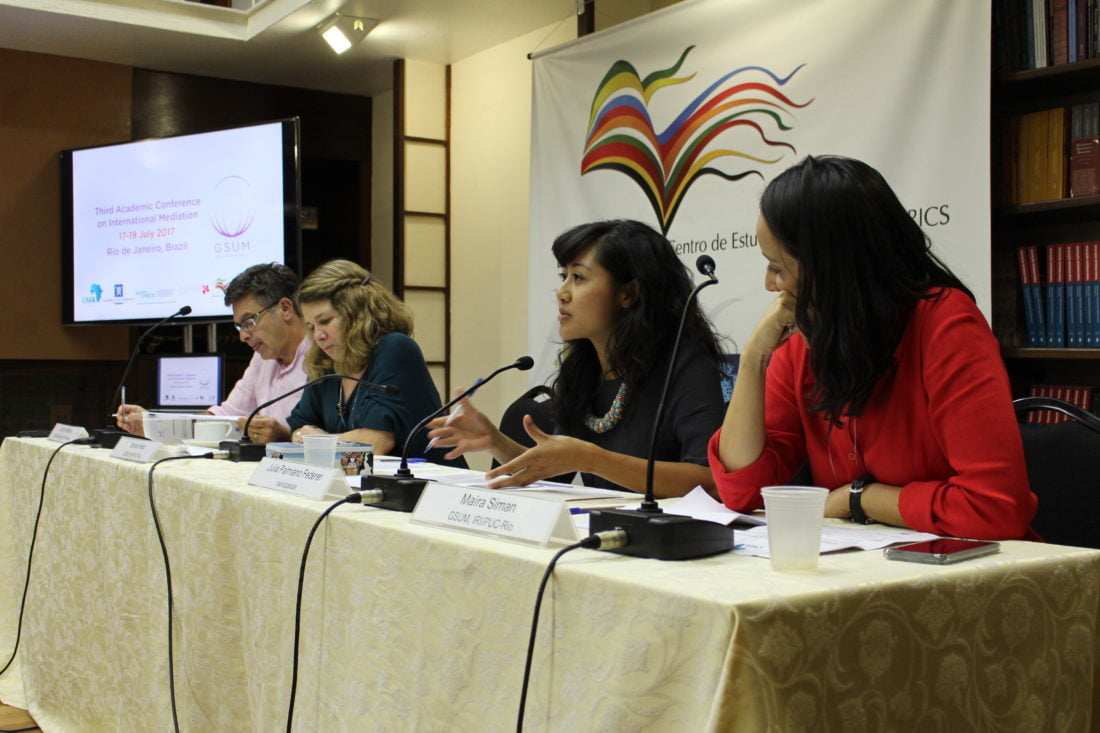 The Global Southern Media Unit (GSUM / PUC-Rio), the swisspeace (associate institute of the University of Basel) and the Center for Mediation in Africa (CMA / University of Pretoria) organized the third edition of the Academic Conference on International Mediation , from July 17 to 19, 2017 in Rio de Janeiro, Brazil.

The Conference brought together academics and professionals from different regions, promoting the exchange of knowledge in the areas of international mediation and peace processes. The connections between different spheres of knowledge in this field of knowledge were explored, as well as a critical reflection on the challenges that arise from gender issues and diverse cultural realities, both by mediators and conflicting environments.

The Conference included two public events. On July 17, Thomas Biersteker (Graduate Institute of Geneva) presented a lecture on “Sanctions and Mediation: What do we know about their inter-relationships?” and on July 18, Marie-Joëlle Zahar (University of Montreal) discussed the theme “International Mediation for the 21st Century: Charting the Way Forward” (click on the lecture titles to watch on our YouTube channel).

The first panels of the Conference took place on the second day (18). Panel 1 dealt with the mandate of mediation and mediation support activities. Jamie Pring (swisspeace) addressed cooperation between the UN, the African Union and African regional organizations in support of mediation. Laurie Nathan (CMA) evaluated the importance of the mediating mandate for peace negotiations, identifying their different types, functions and effects. Valeria de Campos Mello shared some of her experience with the UN Department of Political Affairs (UNDPA), addressing the main challenges to preventive diplomacy and mediation in South Africa. The presentations were discussed by Monica Herz (GSUM).

Panel 2 addressed the inclusion of new actors and the norm of inclusiveness in peace processes. Adrienne Felicity Joy reflected on the role of international mediators in the Myanmar peace process, highlighting the opportunities and challenges encountered by them and how the success of these mechanisms can be measured. Isa Mendes (GSUM) promoted a reflection on inclusion, representation and political participation in the Colombian peace process, especially in the case of delegations of victims who traveled to Havana in 2014. Julia Palmiano Federer (swisspeace) also used the case of Myanmar to counter the current trend of literature, to contemplate a possible responsibility for the norm of inclusiveness for the failure of negotiations. Pedro Maia (GSUM) sought new interpretive angles for the truce between gangs in El Salvador. Claudia Fuentes (GSUM) commented the presentations, suggesting new ways of research and possible points of clarification for the authors.

In the afternoon, panel 3 discussed post-conflict interactions and challenges. Adriana Rodrigues proposed a dialogue between mediation and education for peace from a transformative perspective. Ellen Calmus (Instituto del Rincón) and Ivani Vassoler (State University of New York) shared the experience of a small Mexican NGO in its role of assisting populations affected by violence. Laurie Nathan (CMA) argued that post-conflict constitutions play the role of a specific type of peace agreement. Monica Herz and Victória Santos (GSUM) sought to explain patterns in the treatment of weapons by Latin American peace processes and to analyze them critically. Marie-Joëlle Zahar commented on the presentations.

In panel 4, the focus was on conflict prevention and reconciliation. Guilherme Engelender (IRI / PUC-Rio) addressed truth commissions as potential mechanisms for conflict prevention. Luisa Giannini (GSUM) evaluated the impact of the search for accountability in the International Criminal Court in peace processes. Mariana Caldas (IRI / PUC-Rio) sought to explore how the study of memory can elucidate more critical and political approaches to the field of conflict resolution. The presentations were debated by Marcelo Valença (UERJ).

On the third day, panel 5 discussed the place of women in peacebuilding in different spheres, from the mediation of local issues to international conflicts, as well as the impacts of United Nations Security Council Resolution 1325. Cristiane Carneiro and Kizzy Mota (PUC-Rio) shared some of the Brazilian experience of including women in international mediation and arbitration at the local level. Felix Würkert, a GSUM fellow from Helmut-Schmidt-University Hamburg, challenged some of the expectations associated with resolution 1325, which is not legally binding; other conventions such as CEDAW, could be further mobilized in peace processes. Renata Giannini (Igarapé Institute) discussed some of the ways in which women and gender issues were taken into account in the peace process between the Colombian government and the FARC-EP. Finally, Charlotte Lind (Operation 1325) presented the work of her nongovernmental organization, which trains women for participation in peace negotiations. Julia Palmiano Federer (swisspeace) discussed the presentations, raising points such as the difficulties involved in measuring the impact of women’s inclusion.

In panel 6, the presenters discussed the relationship between mediation practices and mechanisms and regional factors. Jamie Pring (swisspeace) analyzed the mediation process in South Sudan led by IGAD and the limitations on civil society inclusion. Gustavo de Carvalho (ISS Africa) discussed the institutional structures of the African Union and the opportunities and challenges involved in its role in mediation and conflict prevention. Markus Kirchschlager (GIGA) analyzed the diffusion of practices and characteristics of mediation between interstate crises in countries of the same region. Laurie Nathan (CMA / University of Pretoria) discussed presentations challenging some of their underlying assumptions.

Finally, in panel 7, different aspects of the Colombian armed conflict were discussed. Ana Clara Telles (IRI / PUC-Rio) discussed how drug issues were addressed in the Colombian peace process, in addition to the discursive conditions that made it possible to include such issues in the negotiations. Maíra Siman (GSUM) presented a paper in co-authorship with Isa Mendes (GSUM) and Marta Fernandez (IRI / PUC-Rio), in which the authors investigated the conditions that made invisible the victory of the “no” in the referendum on the process of Colombian peace. Jana Tabak (GSUM) presented written work with Manuela Trindade Viana and Luiza Villela, from IRI / PUC-Rio, in which they discuss the possibilities of inclusion of child soldiers in peace processes, and the forms as discursive constructions of these children as being in sources of risk may determine their participation and protection. Paula Drumond (GSUM) commented the presentations, presenting methodological and empirical suggestions.

We will soon have interviews with Thomas Biersteker, Marie-Joëlle Zahar and Julia Palmiano Federer. Follow the GSUM Facebook page to watch them and learn more about our events!