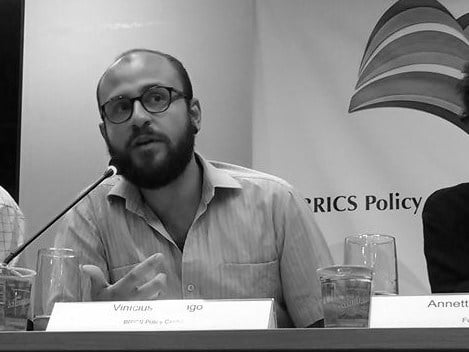 Vinícius Santiago is a PhD candidate in International Relations at the Institute of International Relations of the Pontifical Catholic University of Rio de Janeiro (IRI/PUC-Rio), Brazil. His master’s thesis at the same university dealt with state violence in the slums of Rio de Janeiro. He has been engaged in an ethnographic work with the mothers whose sons have been murdered by the Military Police in the slums of the city. His field work involves following the mothers on public encounters such as protests, marches, vigils where they are able to mourn publicly those lost lives. His research attempts to open space to rethink the arbitrariness of some sovereign practices which are put into play by the armed wings of the Brazilian state. Based on the findings of his M.Phil study, he has published a paper on the narratives of mothers who have been engaged in the political struggle for justice after de death of their sons, From the Backstage of War: the struggle of Mothers in Favelas of Rio de Janeiro, in the Journal Contexto Internacional. His PhD research follows the master’s study and aims to analyze to which extent the female resistance to state violence unveils the mechanisms of power which operate under the structure of state sovereignty. Recently, he has co-authored a book on urban mobility and the right to the city at Complexo do Alemão slums in Rio de Janeiro, published by Heinrich Boll Foundation. His research interests include post-colonial/decolonial studies, post-structuralism, aesthetics, gender, racism and violence.